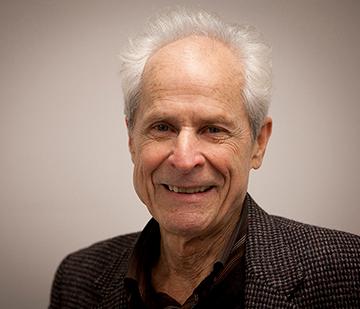 Tony Martin's paintings present a commingling of invented abstract and figural forms in environments taken from his surroundings. This amalgam is akin to actors on a stage, within a room or amphitheater, or a grouping found in nature. The paintings employ worlds that court continuance in mutable space and suggest fluidity within time. Bent and warped planes are one of his specialties, and the intensity in his lines is a hallmark of certain works. Above all, in both his figural works and the abstract ones, unpredictability rules, along with emotional states possessing the power to shape-shift, even as one views them. Inquiry is the constant country, and from its questions comes the drama.

Martin has also devoted himself to using processes of pure light, and simultaneous projected imagery in motion. This practice and painting have cross-fertilized during his entire career. The legendary visual compositions produced at the San Francisco Tape Music Center, and Bill Graham's Fillmore West, stand as early testament to his love of "painting-in-time", and to his involvement with music since his youth. In sculptural, participatory works, viewers influence light imagery both inside the piece and in the surrounding environment. Such signature new media creations point to Martin's life-long attention to the inner life of the individual within the complex dynamics of our interwoven lives. This interaction is essential to the light works, and experienced in a variety of ways in the paintings.

During 2015-17 Martin's works were shown at the Walker Art Center, the new Whitney, the Museum der Moderne-Salzburg, Cranbrook and Berkeley art museums. In 2018, a group E.A.T. retrospective including his drawings made for Pavilion, Expo '70, was shown at the National Museum of Modern & Contemporary Art in Seoul, Korea. A solo exhibition of paintings and drawings occurred at The Hillstrom Museum during autumn of the same year. A group exhibition "Discoteca Analitica" opens in February of this year at Fri Art Kunsthalle in Fribourg, Switzerland.